Magic the Gathering is an incredibly popular game and was the first of its kind when it was introduced back in 1993. Last weekend HobbyTown USA hosted a prerelease tournament for the latest update of the game, Scars of Mirrodin. 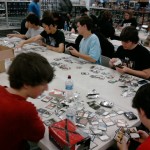 Over 30 Magic players arrived before 10am to sign up and prepare for the tournament. Players are paired up head to head and played 5 rounds over 6 hours to determine the winners. Players earn points in each match and those who collect the most points win the tournament.

What made this tournament special was the opportunity to get the cards in the latest release a week before they became available to the general public. Tournament players each received 6 packs of the new cards from which to assemble the deck they would use for the tournament. Winners received additional packs of cards at the end of the tournament as prizes. 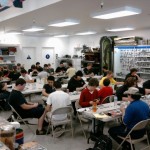 The tournament in progress

The group of players at HobbyTown USA meet every Friday evening for casual play often pull together a tournament if enough players are interested. Jeremy Walraven at HobbyTown USA organizes the Friday night play and has been playing the game since 2000 and has been a qualified tournament judge since 2005. According to Jeremy, the popularity of the game stems from the wide variety of the cards and the randomness in which they can be played. This variety increases the excitement and challenge of the game and helps keep it from getting old.

“The players at HobbyTown USA are more casual than some groups and not so competitive,” says Jeremy, “They are more interested in being together and having fun.” The main age group of the players is from high school to young adult.

If you are interested in learning more, try dropping by HobbyTown USA this Friday evening. It is the official release day for the new Magic cards and Jeremy will be running a Launch Party.