Saturday, Oct. 16, HobbyTown USA of Petaluma hosted the local show for thw 2010 Fall National Model Contest. We had entries for tanks, planes, ships, cars, science fiction, and dioramas. The same day we hosted the monthly Model Building Day and a seminar on how to model water and waves for a ship diorama.

The model build day was well attended. Mike Winters, of the Santa Rosa Chapter of the International Plastic Modeling Society, demonstrated his techniques for modeling water and waves for a ship diorama. Mike is the club expert on ship building and has brought in stunning examples of many WWII ships.

Cars were the dominate subject at this year’s contest and the Best of Show was a huge 1/8 model of a competition sled puller built by Bruce Miller. Think of mixing a 1932 Ford with a gasser drag racer and a tractor puller and you would have Bruce’s model. The body and frame came from a plastic model kit but much of the rest was scratch built.

Our Best Paint award went to Doug Dropesky for his urban camoflage paint job on a Pather F tank. The tank was realistically weathered to show sun fading, stains, rust, and battle wear.

The Best Historical Reference was awarded to John Ferdico for his P-51B WWII fighter. John’s aircraft represented the P-51B flown by distinguisehd American pilot Ralph K. Hofer for the 4th Fighter Group in Europe. The model is mounted on a display base with a phot montage of the pilot, his dog, and his aircraft. 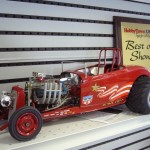 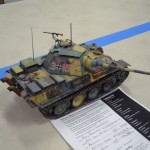 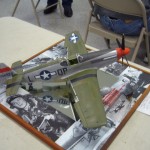 You can the full gallery of models at the HobbyTown USA of Petaluma web site.