On Sunday, October 10, a group of people came to Petaluma to pit their collection of pocket monsters against those of other players. The game is Pokemon (a contraction of pocket monsters) and the event was a Battle Roads tournament where players compete to earn points which will take them on higher level tournaments and hopefully the World Championships. 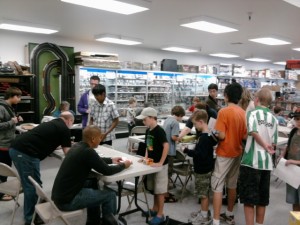 Judges help players get registered for the tournament.

The Battle Roads tournaments are the first tournaments of the season and are designed to give newer players a relaxed atmosphere where they can build their tournament play confidence. A more challenging tournament, with many more points at stake, are the City Championships. HobbyTown USA in Petaluma will be hosting a City Championship on Sunday, Dec. 19th.

While many people think of Pokemon as a kid’s game, it is played by children as young as four years old to adults Tournament play is dived into three classes of Junior, Senior, and Masters where Masters are mostly high school to college age players. Many of the adult players began playing the game with their children. 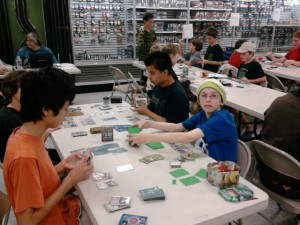 Parents feel good about their kids playing Pokemon as it is a family oriented game that promotes reading, math, logic, and sportsmanship. Tournament judge, John, stated that Pokemon teaches many of the same skills as chess but it is more complex and more popular with children. Good Pokemon players are often planning multiple moves ahead of the game.

The tournament organizer, Lianne stressed the strong community aspect of organized play and pointed out that many parents and their children compete in tournaments together. Many Pokemon players enjoy helping newer players improve their skills, there is often a lot of assistance and learning going on among players at a tournament.

The champions of the Battle Roads tournament at HobbyTown USA were:

Congratulations to all players.

P.S.: Stop by HobbyTown USA this Saturday for radio controlled model car racing and to see the entries in our Fall National Model Contest.