Last weekend the Liberty Flyers radio control model airplane club held their first Canvas Falcon Biplane Competition at their flying site just off Stony Point Road. It was an event to celebrate aircraft of WWI and the Golden Era of flight prior to 1938 and to promote the building and flying of scale models of these aircraft.

The event drew scale aircraft builders and pilots from all over Northern California. Sid Maxwell, a club founder, estimated that 15 to 20 had registered for the event. Eric Kirby, the organizer of the event, said he was looking to see how much interest there was in making this an annual event. His goal is for the Canvas Falcon to mature into a popular competition for scale flying and a concourse model show.

Scale flying involves operating the model aircraft in a manner that duplicates the flying characteristics of the real aircraft. With the power of today’s glow fuel and electric power systems it is possible to build a biplane model that would fly at a scale speed of hundreds of miles per hour! Scale model pilots not only take care in selecting scale appropriate power systems, they also practice precise throttle control to fly their models at realistic scale speed.

The most popular models at the competition were the ultra detailed 1/3 scale biplanes. These large models accurately represented historic aircraft from WWI right down to scale stall indicators on the wings, detailed interiors, and historically accurate colors and markings. Tim, a modeler from Richmond, brought a 1/3 scale Sopwith Camel with German markings. This aircraft was captured intact and later flown by German ace Otto Kissenberth. Tim researched the correct colors and insignia for Kissenberth’s aircraft. Tim estimated that he spent nearly 2-1/2 years and over a 1000 hours building his model. It flew wonderfully too. 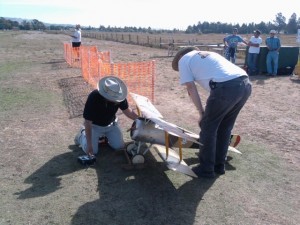 Pilots check out a French Nieuport prior to take-off. Click the picture to see the Nieuport fly. 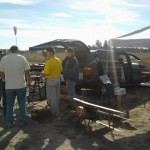 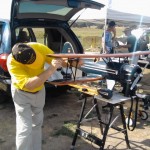 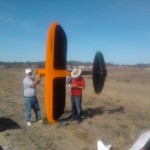 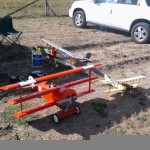 A collection of small biplanes. 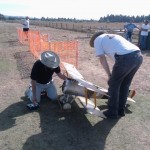 Pilots check out a French Nieuport prior to take-off. 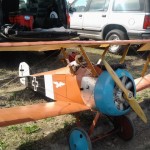 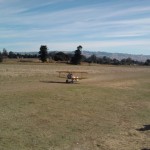 The Sopwith heading down the runway for take-off. 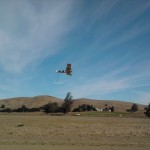