Eric Paz, a Petaluma resident and RC manager at HobbyTown USA, recently took a fourth place at the North American Finals of the Tamiya Championship Series (TCS) held near Los Angeles. Eric has raced in the series six times and has continued to improve his finish at each race. “I really had a shot at the podium this year,” said Eric, “but I made a couple mistakes in the A-Main and when you are racing at this level you can’t make mistakes.” Eric’s goal is to win the race and earn a trip to Tamiya Japan to compete in the TCS World Finals.

The event spans three days consisting of a day of practice, a day of qualifying, and a day of finals. After running in four qualifying heats Eric earned a 6th position start in the A-Main final race.

Here are a couple of shots of Eric with his racing sedan and a close up of the chassis. 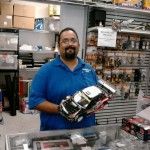 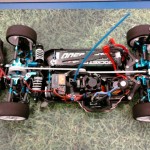 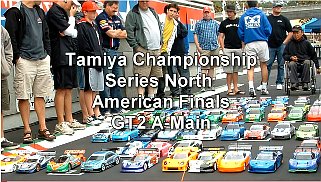 If you want to get a taste of RC racing right here in Sonoma County, you can come see the HobbyTown USA parking lot racing coming up Saturday, Sept. 18th.

You can also contact the Redwood Empire RC Ground Pounders, they hold races on the 1st Sunday each month at various locations in and around Santa Rosa.