Thousands of people came to the Sonoma County Airport for the Wings Over Wine Country Airshow; they saw helicopter demonstrations, WWII fighters flying in formation, aerial combat, high speed jet passes, and an eight-year-old flying solo! Oh, I understand there were also some full size aircraft on display and flying demonstrations of those planes too.

Of course I am talking about the radio-controlled scale flying model display and demonstration put on by the local Wine Country Flyers club. This club has displayed its models and put on flying shows at the Wings Over Wine Country Airshow for many years. Their official demonstration time is usually early morning each day right after the show opens but they are often called upon to come out and entertain the crowd during delays for regular airport traffic or preparation time for the big aircraft. 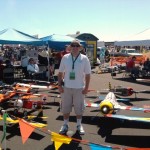 Jon Stychno is the Wine Country Flyers director for the air show. Jon coordinates all of the members bringing models, plans the flight routines, and keeps the program running smoothly throughout the show.  “This is not something that just happens,” said Jon, “Everyone in the club contributes many hours preparing their planes, practicing flight routines, and manning the club booth. We really appreciate the Pacific Coast Air Museum for providing display space and time in the event schedule to allow the club to participate in the air show.”

So why do they work so hard? Members of the Wine Country Flyers not only enjoy building and flying scale model aircraft but they also want to share the fun of this hobby with Sonoma County. They are an organization where people can meet others with similar interests and form lasting friendships. Club members are always willing to offer advice and assistance to other flyers. 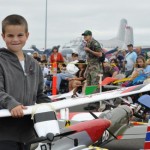 Ben Mackles flew a plane as big as himself.

Speaking of offering advice and assistance. One of the highlights of the show was eight-year old Ben Mackles flying his electric-powered Eflite Apprentice with a 58″ wingspan. Ben just completed second grade at Sonoma Country Day School and has been flying for less than a year and recently earned his solo flight certificate. Steve Cole, owner of Awesome Hobbies in Healdsburg, has taught both Ben and his older brother how to fly. According to Steve, “Ben is just a natural flyer.” Ben is also developing his aerobatic flying skills with some micro-electric airplanes. Look for Ben to put on more flying demonstrations in years to come.

Other highlights of the show included a dogfight between Snoopy in his flying dog house and the Red Baron in his DR1 triplane. These were piloted by Robert Jensen and Steve Cole. Sadly, the Red Baron won yet again.

There were also formation flying with six giant scale warbirds and high speed scale jet passes with speeds between 125mph and 160mph (that is true speed, at scale they would be moving faster than Mach 1!)

You can learn more about the Wine Country Flyers, and plan to attend one of their meetings, by visiting their website at www.wcflyers.com.

Below is a list of all of the Wine Country Flyers members who performed at the Wings Over Wine Country Airshow and the planes they flew.