Home/NBGamingGroup/American Civil War on a Table Top
Previous Next

The North Bay Gaming Group from Cotati runs a miniature game day at HobbyTown USA in Petaluma on the last Saturday of each month. The most popular subject of late has been World War II battles but on a recent Saturday some Union troops encountered Confederates near a farm house and it was the 1860’s again. 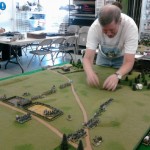 Richard sets out his Confederate troops for battle.

Ron and Richard started the game with a couple of brigades apiece. Ron’s Union troops held a hill and a forested area while Richard’s Confederates advanced from behind a farm house and across an open field. I commented that, except for the commanders, there did not seem to be any cavalry.  Richard explained that cavalry forces were not commonly used in civil war battles. A combination of  expense, improved infantry tactics, and the large targets offered by mounted soldiers reduced their effectiveness. These guys not only play the game, they study the history too.

The game was scheduled to run 10 turns with the force controlling the greatest amount of territory, or wiping out the enemy, being declared the winner. Ron’s Union troops on the hill quickly decimated a regiment of advancing Confederates but then Ron’s dice began to fail him. In order to rally troops and effectively fire on the enemy you have to roll higher numbers on your dice; rolling low numbers means you miss your target and your troops lose moral and become disorganized. Fortunately for Ron, Richard’s dice rolls for his Confederate troops weren’t much better. At one point the battle seemed to consist of the forces running up, exchanging  insults, and running away.

Ricard deployed another regiment around the farm house to engage Ron’s flank and eventually charged the Union forces protecting the hill. Richard’s tactics seemed to hold and Ron’s troops began to suffer and fall back, but not before inflicting some serious damage on the charging Confederates. 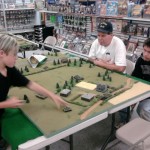 James introduces some new players to a tank battle. 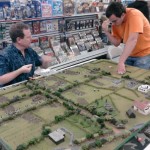 David and another player reenact Villers-Bocage.

Of course the WW II players were there too. James was training up some new commanders by running some small tank skirmishes and David and another player reenacted a the battle of Villers-Bocage in Northern France.

If you are interested in miniature battle games, members of our Flames of War and Warhammer 40K groups play on Monday and Wednesday evenings every week at HobbyTown USA in Petaluma.