The Lost Joy of Building

The Lost Joy of Building

A confluence of events resulted in this post; first was an article by Mitch Albom in the Sunday Press Democrat back on May 2nd, next was the advent of the American Graffiti Pinewood Derby to benefit local scouts, and last was the monthly model build day at HobbyTown last Saturday. All of these events propelled me to build my own pinewood racer for the derby.

Albom’s article “The Lost Art of Building With Your Hands” told of a boy who built a windmill to benefit his village and then went on to lament how many Americans have lost the desire, imagination, and skills to build things of our own. Along the way we have lost the joy of creation. You would think that as the owner of a hobby store I would be up to my chin in hobby construction projects; but like the cobbler’s children without shoes, the model car that I had started building before I opened the store six years ago still sits on the work bench.

I decided to build a car to help the scouts and along the way I reconnected with the joy of building again and sharing that experience with others. I pulled a block of wood, some wheels, and a few tools off the shelf and headed down to HobbyTown to start my project. I was the odd man out, sawing and filing a piece of wood while others worked on detailed plastic models. Everyone however was supportive and commented on the project as well as their surprise that Steve was actually building a model! I spent the whole day blissfully cutting and filing and felt growing satisfaction as my raw block of pine began to slowly suggest the shape of a ’32 Ford Deuce.

I joined my fellow modelers chatting about model building issues, life, and bad jokes, and from time to time they would comment on the rake of my roof, placement of the wheels,  and where to find a good choice for the engine. I ended the day feeling happier and and more satisfied than I had in a long time. 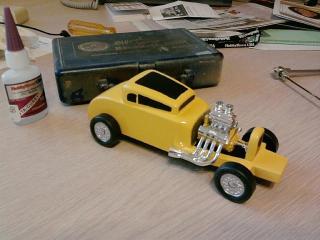 Over the next couple of days I finished the car and prepared it for the race. It won’t be the fastest but it is a real looker.

The Miwok Scouts American Graffiti Derby is this Friday from 4pm to 8pm in the Plaza North Shopping Center. Come to the center to see some full size classic cars, participate in a radio controlled monster truck car crush in honor of Big Foot, and to watch the derby and possibly donate to our local scouts.