Build a Car to Help the Scouts

Home/community/Build a Car to Help the Scouts
Previous Next

Build a Car to Help the Scouts 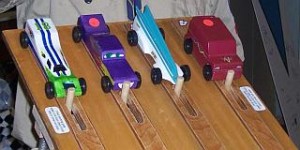 Here’s a way for you to not just watch the Salute to American Graffiti but to participate as well and help local Cub Scouts at the same time. You can build a pinewood derby car to compete in the American Graffiti Derby on May 14th and donate it to the scouts to auction off.

For the second year in a row, the Miwok District Cub Scouts’ are running the American Graffiti Derby.  Last year the scouts built and raced cars which were then auctioned to the public to raise money for the scouts. This year the public is invited build cars that will be auctioned off and raced after the scout race.

Car designs should represent a car or subject from the American Graffiti movie, or any car from 1972 or earlier. The cars will be sold at silent auction during the scout race portion of the event and then the new car owners will be able to race their cars.

All proceeds will go the the Miwok District to support local Boy Scouts of America activities.

Here is a link to the derby informational flyer and rules.

You can learn more about the Salute to American Graffiti celebration at the event website.

Make a car, help the scouts, have fun,
Steven