Home/CoastalValleyLines/Model Trains and Memories
Previous Next

This past weekend the Coastal Valley Lines (CVL) model railroad club held a train run at The Lodge at Paulin Creek senior center. A train run is when members of the club bring track modules to a public venue and assemble them into a operating layout. They then run their trains and answer questions from the public for the weekend.

Club member Brad Squires mentioned that The Lodge at Paulin creek has been a regular location for the club for the past five years; it is also one of the club’s favorite locations. “We get lots of compliments,” said Brad, “Residents come to see the layout on Saturday and then return with their grandkids on Sunday.” The residents remark how seeing the model trains reminds them of the time when they traveled by train. “You have to remember,” said Brad, “that this is the generation that regularly rode trains. It brings back memories.”

Club member Jerry Goodenough was at the throttles that afternoon, controlling three trains as they moved around the layout. Because of limited space the layout was only 20′ by16′ feet in size. “Our layout at Spring Lake Village in June will be bigger almost 60′ by 20′,” said Jerry. Club members usually arrive on a Friday evening and spend about 2-1/2 hours setting up the layout. They then spend all day Saturday and Sunday talking to the public, running trains, and working on locomotives and rolling stock. The CVL club tries to hold a public train run every other month. Their next run is at Spring Lake Village on June 26 and 27.

If you would like to get involved with the Coastal Valley Lines club, they hold a club meeting the first Thursday of every month as Sam’s For Play Cafe on Cleveland Ave in Santa Rosa starting at 7:00pm. 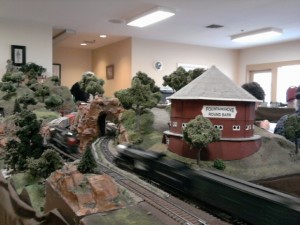 Two trains pass each other at the round barn module. 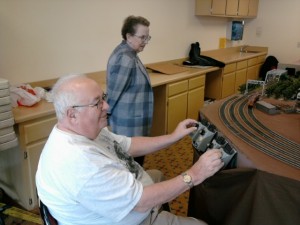